Three of the most well-known and commonly traded bonds are the government bond, the municipal bond and the corporate bond. They are all a type of debt security. 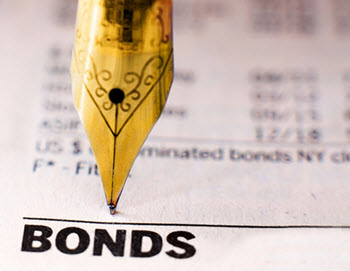 Some government bonds are inflation-indexed, which means that the face value payment and/or the interest payments are linked to a consumer price index. Issuing inflation-indexed bonds is a way for governments to attract investors who would otherwise worry about inflation eroding the value of the bonds.

Before buying a municipal bond, always check if the issuer is taking on a general obligation for the bond or not. It is legal for entities in the U.S. to issue municipal bonds and link them to a specific revenue stream. Municipal bonds issued to fund the creation of a local city airport can for instance be tied to revenue from that airport and not to the city as a whole.

When a corporation needs money, e.g. to finance a new R&D project or to build a new factory, it can seek this money in various ways. It an issue new shares and sell them, it can obtain a normal loan from a bank or it can issue corporate bonds and sell them – just to mention a few of the options available.

A few examples of things to consider before buying a corporate bond:

Perks are sometimes tacked on to corporate bonds to make them more appealing to investors. A well-known example is the convertible bond. If certain terms are met in the future, a convertible bond can be converted into shares in the corporation.

Exchange-traded corporate bonds are highly standardized, while corporate bonds that are traded over-the-counter (OTC) can come in many different forms and with tailor made terms and conditions.

Corporate bonds intended for international trading are usually issued in USD or EUR, even when the corporation is based in a country with another official currency. Sometimes bonds are issued in a foreign currency to take advantage of low interest rates and the perceived stability of a currency; USApple Inc did for instance issue corporate bonds in Swiss-francs in early 2015.