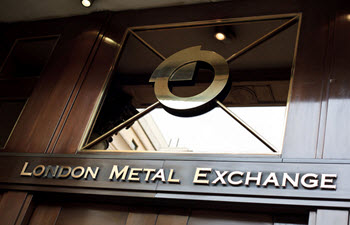 If you are trading in certain metal commodities, such as copper, cobalt or aluminium, learning a bit about the London Metal Exchange is a good idea since the market prices of several important metals are highly impacted by trades taking place on this exchange.

The London Metal Exchange (LME) is the world’s largest market for options and futures contracts on base metals and certain other metals. It is also an important market for Traded Average-Price Options (TAPO).

Examples of underlying metals for derivatives traded on the LSE

Examples of metals that aren’t underlying for derivatives traded on the LSE are gold and silver (which are traded on the London Bullion Market instead) and platinum and palladium (there is a special London Platinum and Palladium Market for them). 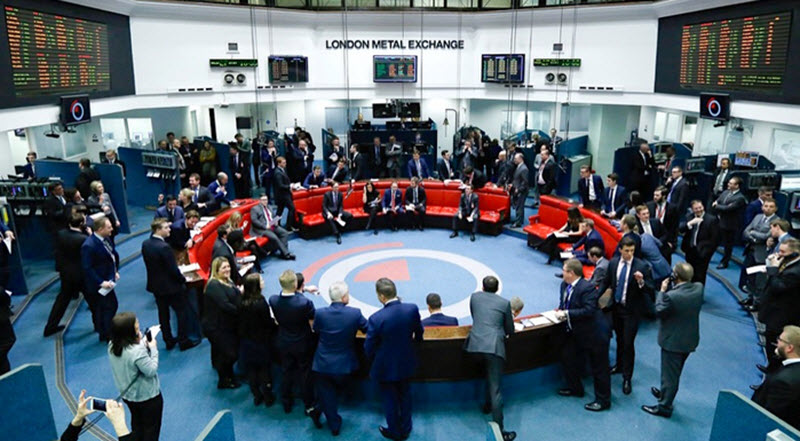 Trading in the Ring

Ring trading using open-outcry is still possible at 10 Finsbury Square, in the London Borough of Islington. Most exchanges in Europe has retired their open-outcry trading, but ring trading in this fashion is still going on at the LME – although only a fraction of all trading takes place like this. Most LME trades have migrated to the electronic trading platform.

There are two trading sessions: 11:40-13:10 GMT and 14:55-16:15 GMT. Each session includes a 10 minute trading break. In the Ring, nine contract types are traded. Each contract type is awarded its own 5-minute long time slot for trading during each session.

As mentioned above, most of the LME trading is nowadays taking place on the electronic platform and not in the ring. Still, the ring trading remains important since it is still central to establishing the official prices of the LME. These prices are taken from the most liquid periods of trading in the ring.

The last offer price in the ring before the afternoon session end-bell is used to determine the official settlement price. This is the price used when contracts are cash-settled (instead of being settled through delivery of actual metal).

Also, the second trading block of the morning session is vital to setting the Dialy Official Exchange rates.

The Ring Dealing Members of the LME

Many other companies are involved in the ring trading, but they have to go through one of these nine ring dealing members.

As mentioned above, most of the trading on the LME takes place on the electronic platform nowadays instead of in the ring. The electronic trading platform LME Select premiered in 2001. It is a FIX-based platform developed by Cinnober, a Swedish software company.

The LME is used by both speculators and companies that actually need physical delivery of metals, but a very low percentage of all the trades on the LME result in actual physical delivery. Even among companies that use metals in their business, the LME is more likely to be utilized to hedge costs than to actually obtain metal or sell off an excess.

Physical delivery of metals is possible since metals are kept in special warehouses approved by the LME. These warehouses are not just found in London or in the United Kingdom, but in many different locations around the globe. If you carry out a trade on the LME that gives you the right to take physical delivery of a metal, you will be given a warrant and with this warrant you can fetch the specified amount of metal from a warehouse.

Information about how much of each metal that is kept in the LME-approved warehouses is released by the LME on a daily basis.

The history of metal trading in London goes way back. What started out as informal trading eventually resulted in the formation of the Royal Exchange in London in 1571. In 1877, the London Metal Market and Exchange Company was founded. Back then, it focused on copper trading.

In the 1870s, a ship loaded with metal from South American mines could be expected to reach London within three months after leaving Chile. Therefore, contracts traded on the London Metal Market and Exchange typically stipulated delivery of the purchased metal three months after the start date of the contract. Because of this, contracts with a three month life span are still very common at the LME.

Eventually, lead and zinc trading became important for traders on the LME in addition to the copper, but this aspect of the London Metal Market and Exchange wasn’t officially recognized until 1920.

During World War II, the London Metal Market and Exchange remained closed. After the war, it didn’t reopen immediately, and it would take until the mid-1950s until trading commences here again.

Trading in nickel and aluminium commenced on the London Metal Market and Exchange in the 1970s. Tin was added in 1989, followed by aluminium alloy in 1992, steel in 2008 and cobalt and molybdenum in 2010.

In 2012, LME was acquired by the Hong Kong Exchanges and Clearing.